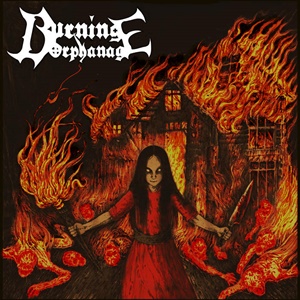 Hailing from Germany – metal mecca of Europe – Burning Orphanage is a duo aiming to throw a healthy mix of groove-obsessed thrash metal at your ears for this self-titled full-length. Brace and Jack Nier handle all the instrumentation and vocal duties, serving up an eight-song platter that straddles a host of past and present influences. Commending the DIY philosophy behind these two musicians, there are a few growing pains that probably need to be fleshed out a bit as in its present state, the band doesn’t necessarily possess the hooks, riffs, melodies, or songs that can vault them out of the underground and into greener pastures.

What’s evident early is the distant, basement-like quality of the production – all the instrumentation seems to have this cloudy, murky aspect where it’s often tough to discern certain guitar runs or the drum performance. Which is a shame, as there are some killer riffs within cuts like “Lumina” and the Voivod-ish “Colossus” that get buried in the final mix so to speak. Jack as a vocalist has a perfect fierce and semi-barking nature, reminding this scribe a little of Power Trip meets Pro-Pain to deliver those key venomous verses and potent choruses for “The Spiral” and “Walk with the Dead”. Burning Orphanage certainly know how to construct groove-laden thrash, wasting no time with prolonged setups and getting to the heart of the matter with “Leadneck” even injecting some early traditional, NWOBHM nuances amidst the Pantera-oriented crunch. The cover art has a little girl burning down her orphanage – not exactly surprising but could have been done better with a slightly more professional artist handling this and hopefully will be taken into consideration the next go around.

We have all seen and heard plenty of one and two-man project successes at this level – so hopefully Burning Orphanage will look at this as an effort where they need to swing a little harder and elevate their game on all fronts (especially a better studio situation for production) through their next recording.