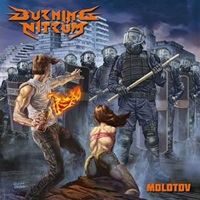 In today’s thrash parade, you find most newer bands gravitating towards one particular favorite scene, be it the Bay Area, the East Coast faction, or Teutonic eras that generated such a buzz in the mid to late 80’s. So when I find after a couple of passes that this Italian quartet Burning Nitrum profess an equal affinity for both US coasts of thrash, hopes are high for an exciting musical cocktail.

Active since 2010 and already generating a buzz with their Pyromania EP of 2012 and a single a year later, Molotov keeps up the ‘fire’ theme that seems to be ever present in the title scheme. And amidst the 8 songs (plus 2 intros/interludes) you’ll get a lot of Bay Area chugging and rhythms that percolate in an Exodus meets Forbidden way, along with a sprinkling of that Nuclear Assault/Anthrax angst. Lead guitarist Walter Lanotte certainly studies the greats in the axe business – check out his Alex Skolnick meets Jeff Waters speed and neo-classical precision on favorites like “Apocalypse of Pain” or intensely aggressive “Sparkling Splatter”.

The band mix up straightforward thrashers with more musically expansive arrangements at times, “High Speed Bangers” for instance opens on a quieter, clean classical level before the double bass and mid-tempo riffs kick your teeth in, while “Nemesis, The Death Star” is an 8 minute plus instrumental that is a rollercoaster in the Vio-lence, Forbidden, and Annihilator mold. The stumbling block for some will be the off kilter vocals of Dave Cillo. Trying to be Russ Anderson is one thing, but actually sounding like the red headed stepchild of John Connelly and Sean Killian is another. The Holy Terror meets Anthrax-esque “Remote of Death” seems fine until the first shrieks and barks from Cillo aurally chill the air like nails across a chalkboard, but I know others will tune this aspect out because Molotov contains the speed, energy, aggressiveness and strong gang choruses most thrash maniacs desire.

Probably one for the old schoolers, as Burning Nitrum fuel a love for the past.