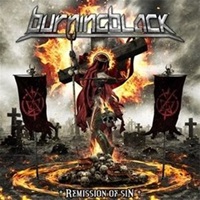 Occasionally you get thrown a surprise bone when reviewing material from particular countries. Anytime Italy comes to the forefront, it’s usually something Progressive, Power, or Neo-Classical oriented – being the land of Rhapsody (Of Fire), Labyrinth, and their offspring of course. From Treviso we have the five-piece outfit Burning Black – gaining a start in 2004 and releasing two previous albums, the last of which MechanicHell in 2009 met with a decent response from many journalists (myself included). Burning Black plays in more of a straight forward, classic heavy metal manner, using guitar and high octane vocal power plus hard hitting bass and drums to get their songs across.

The five year delay for album three Remission of Sin ultimately comes down to a series of lineup changes, as only vocalist Dan Ainlay remains from the last album. So welcome to the fold guitarists Chris Jeremy and Eric Antonello, bassist Simmi Wild, and drummer Luke Oswin, thrown into the proverbial fire on the live front and now hunkering down for these studio sessions. We get 11 tracks that possess a lot of similar qualities to the 1980’s power and traditional scene that many adolescents cut their teeth on – guitar riffs coming from a Randy Rhoads or dual power framework, in the pocket percussion and occasional fill flourishes, plus stair step, multi-octave vocals and European style choruses that possess a boatload of harmonic warmth.

Before everyone wanted to replicate Malmsteen’s thousand note, neo-classical finger dexterity, you may remember axe men who played precisely, sparsely, and careful used doubling things up tastefully. Chris and Eric are cut from that NWOBHM meets European cloth – Judas Priest, Accept, and Savatage in their wheelhouse for “Mercenary of War”, the spaced-out “Soulless Stone”, and Maiden meets Primal Fear-esque cut and chase-like “Crucified Heart”. Occasionally breaking up the electric proceedings between a tasteful Scorpions-oriented instrumental like “Spaceman’s Theory” or the Latin acoustic textures that add flair to the anthem stomper “Far Away” gives Burning Black another tool in their musical shed to hang uniqueness upon.

The toughest sell for most consumers will be in vocalist Dan Ainlay. Taking into account his English phrasing difficulties, his shriek propensity is like a glam singer gone into convulsive shock mode, as if he wants to be Sebastian Bach but has more of a James Hetfield mid-range nature. Check out “Flag of Rock” during the verses and you’ll hear every inflection that can make or break the band’s ultimate acceptance, especially in a sub-genre known for some spot on heavy hitters like Halford, Dio, Tate, and Dickinson.

Remission of Sin has modest hope and heart on its side – if you can handle the singing limitations, Burning Black resonates as another solid classic metal with American hard rock crossover that may carve out their own cult following.