Burn the Mankind – To Beyond (Mighty Music) 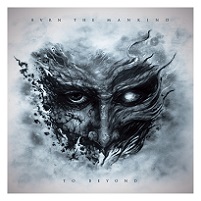 Death metal has progressed (or regressed) to the point where nearly every moment found on a certain record can be traced back to its originator. It’s a difficult angle in which to work; there are quite a few bands who honestly believe they’re not working over the sounds of the past. Yet the bands who willingly embrace their influences while keeping the songcraft steady usually find a way to make things work, just like Brazil’s Burn the Mankind. Formed in 2009, the band has yet to produce a proper full-length until the album in question, To Beyond. And as far as debuts go, they’ve got themselves off to a pretty nice jump.

The influence-mongering referenced above boils primarily down to Morbid Angel up until Covenant. You know the riff tactics – they can be spotted from a mile away, and Burn the Mankind isn’t afraid to haul them out, whether it’s on a grueling mid-tempo stretch, or all-out blasting. The variation is more than enough to make a few of these cuts stand out, most notably “Real Slave” and “Everyone is Blind.” And just because they’re from Brazil doesn’t mean they sound like Krisiun. In fact, the noticeable Floridian influence cut throughout the album (which includes two bonus tracks tacked on at the end), evokes all the right parties, down from Malevolent Creation (“The Gun”) and Legion-era Deicide (“Cries”).

Flying in the face of several pre-set, worn-out death metal norms, Burn the Mankind is an album for the old-school, by the old-school, apparently. Don’t mistake this as total revisionist death metal – there’s plenty of fresh, agile ideas to be had, but if you’re on the hunt for the style’s golden era bulldozed by a bunch of rabid Brazilians, then To Beyond (and Burn the Mankind) are obviously the way to go.