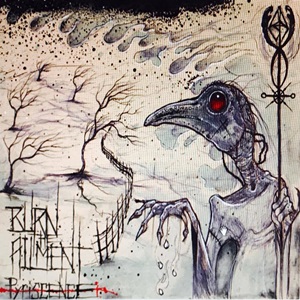 On their second go around following an early 2009 demo release and subsequent hiatus while guitarist Clint Benson finished his college studies, Burn the Ailment hail from Dubuque, Iowa, aiming to put the state on the map for more than unearthing Slipknot. Using self-recording programs and studios to capture these tracks, Pyriscence is a full-length that contains adequate measures of old school and modern thrash without compromise – probably guaranteeing hair windmills, savage brutality in the pit, and sweat dripping from every pore of your body.

The intro title cut serves as an instrumental setup, an echoing acoustic/twin electric exercise that allows Clint and fellow guitarist/vocalist Zach Rogerson to wield melodic harmonization and tasteful riffing, before the fierce “Trial by Fire” whirls about. Crunchy, heads down riffing, speedy drum tempo transitions and Zach’s sneering voice (equal cues from Dave Mustaine and Chuck Billy) making this arrangement intoxicating, as well as a surprising bass solo from Brandon Erickson thrown in for a curve. The crunchy mid-tempo oriented “Into Black” contains all the requisite riff twists, clean ambiance, and methodical vocals that recall Megadeth in their commercial prime circa Countdown to Extinction – gaining the band some key hometown rock radio play as well. The modern aspect comes into focus for certain staccato-style sections or digitally driven double bass combinations, as “Roots of Evil” takes things into a down-tuned march with some Machine Head-ish meets Crowbar inflections. The lead work has quality magical moments adhering to the arrangement on hand – elevating Burn the Ailment to that classic metal meets Bay Area thrash platform while not being frivolous, pompous shred exercises.

Clocking in at a comfortable 32 minutes and change, Pyriscence proves that the best thrash bands aren’t stuck in one stock tempo or riff mold – that the shades of grey in terms of nuances, embellishments, and intricacies advance the material deeper as you gain more clarity with what’s on hand. Hopefully next time they reign some of the excessive triggered double bass action in – as drummer Greg Mueller certainly displays a high caliber attack and versatility beyond that wall of taps. Burn the Ailment deliver the thrash goods on Pyriscence, especially necessary for those who like to sink their teeth into slightly intricate and hooky songwriting.