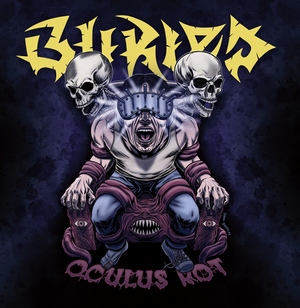 When it comes to the world of brutal death metal, Pyaemia was a much celebrated act that only released one EP and one full-length. With the recent releases from Arsebreed and Disavoved, which can trace members back to said act, brutal fans have yet another band to now champion with Buried, which features three Pyaemia members in their mix.

The combination of Joel Sta (vocals), Robbert Vrijenhoek (drums), and bassist Worm will make the band seem like more or less a successor to the Pyaemia name, but Buried is its own beast when it comes to sound. Brutal death metal is still at the core of this sound, but there’s some clear modern twists that bring the band put to a more ‘current’ feeling that an old school worship of their previous sound. The most noticeable piece is that of groove. That mechanized, Decapitated-like groove often employs itself into songs and works as a headbang generator. Truthfully speaking, you can randomly pick a track here and find a juicy bit of groove, though “Tornado of Blood” works well as an example. The track can leverage faster tempos, but the groovy vibe is persistent from the beginning to end. It gives listeners something to grasp onto and balances well against the visceral and intense vibe that surrounds Buried. While the band’s unrelenting energy is an oppressive force from the onset (“Retribution”), some slight technical trimmings and occasional odd time signatures give some added depth instead of it just becoming a one-dimensional bludgeoning. “Leech” offers some rather intriguing riffs that hit just as hard from a cerebral standpoint as a crushing one. It’s really that combination that makes Buried stand out in comparison to what the more brutal acts in this area are doing.

Unabashedly brutal but never mindless, Oculus Rot is a memorable introduction to a band that isn’t going to simply ride the coattails of Pyaemia to garner success. Buried have a combination of old school brutality and more modern nuance that hits just the right sweet spots for maximum carnage and enjoyment.