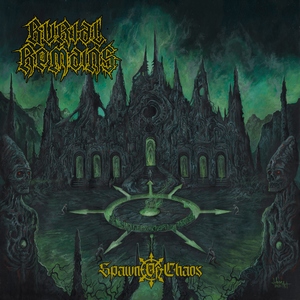 Just like the band’s debut effort last year, Trinity of Deception, the band’s quick follow-up in Spawn of Chaos doesn’t pretend to be anything it’s not. Old school Swedish death metal by way of The Netherlands, Burial Remains isn’t out to rewrite the playbook so much as get as much blood, sweat, and tears out of it as possible (probably more of the blood and sweat than tears).

The heavy HM-2 buzzsaw opens things up and displays the goods for all to see. Old school carnage at its finest, the band digs their claws into the speedy uptempo runs and d-beat urgency, meaty mid-tempo riffage and occasional melodies, and some doomy crawls to make sure they have all of the bases covered. While it may sound textbook to a tee, and it definitely checks all the boxes for Swedeath metal, it doesn’t become less interesting because of it. Instead, it’s about how the band wisely chooses their transitions and where to really showcase each element of their sound. The songs are energetic and memorable, even if you can predict them a mile away. “Where Death Begins” is a perfect example of this. There’s grinding speed and visceral energy for a good portion of the track, but the occasional leanings into some eerie, slower melodies and driving mid-tempo crunch makes the track a thoroughly fun romp. Despite the raging HM-2, you can even hear the basswork too, which is a great addition to the band’s effort to be furious.

Burial Remains does the old school Swedish death metal thing with more energy and enthusiasm than a lot of acts out there. By adding in some melodic and doomy/atmospheric elements, with the longer tracks especially, it helps to provide a more fleshed out feeling that maintains momentum and interest. If Swedish death metal is your thing, this is a must. 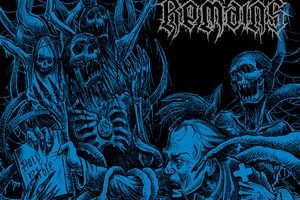