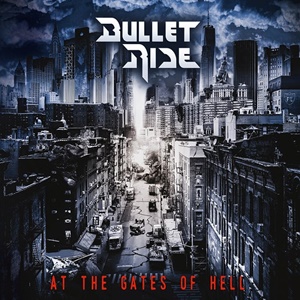 Building up from a covers act in the heavy/thrash mold into an original entity, Bullet Ride hail from France, forming in 2014 and taking six years to build a steady lineup and develop material to the point of this debut album At the Gates of Hell. Recorded in the fall of 2020 (and probably delayed as a release for pandemic causes), these ten tracks showcase a quintet that intertwines a mix of classic melodic metal, power, and thrash aspects – injecting minor nuances of modern and extreme metal when necessary. The results can be a see-saw in appeal between breathtaking and slightly shaky, depending on the song and atmosphere/delivery present.

There is a technical, progressive drive to the powerful rhythms and transitions between Philippe and Alex as guitarists – adept at gallops and crunchy Iced Earth-like pounding for “Point of No Return” while hitting some heads down early Metallica-like thrash chugging during “Dead and Back”. The softer acoustic strains that give way to beautiful electric distortion on the ballad “All at Sea” take a massive speedy transition midway through that will surprise many, beyond the higher register notes that vocalist Manu hits. Her comfort zone range has an endearing quality that is still metal to the bone, although the rhythmic, French-accented nature to her delivery on opener “World on Fire” seems a bit off kilter (beyond the occasional low death growls). Understanding the need to fill out certain songs like “Somewhere Else” with supplementary keyboard orchestration allows the listener to focus on the next thrash blast, where often the twin guitar harmonies, diverse melodic/extreme vocals, and punishing rhythm section work holds your interest. Most of the songs sit in that ideal four to five-minute mold, the closing title track at six minutes the longest featuring some circular guitar melodies, dazzling drum fills, and cultural instrumental highlights that should evoke cheers from the legions.

Bullet Ride possesses that nice balance between catchiness and semi-progressive parts all rolled together into a thrash package which isn’t like most of the brigade content to recycle and repackage the old guard into something new. Should be fun to watch what comes next from the band.