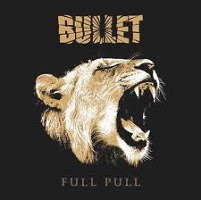 Anyone who has seen AC/DC singer Brian Johnson live in the last ten years or so could make the appeal that he looks like he’s trying to “pass something” while singing. What that “something” is, we’ll leave to your imagination (bathroom humor is gross!), but the rigors of touring and Johnson’s age (64) have made him a shell of the singer he once was. Similarly, Bullet vocalist Dag Hell Hofer sounds like he’s being strangled while he’s singing. That, or he’s the ill begotten son of Johnson and former Accept throat, UDO Dirkschneider. There’s something about singing for AC/DC or AC/DC soundalikes that entice masochists, apparently.

Yet another one of those “this is literal interpretation of AC/DC, but we’ll omit that from our bio” bands, Bullet have been making the rounds since 2001, with their Nuclear Blast debut Full Pull being their fourth full-length. Adding additional intrigue is the production tandem of Fred Estby (ex-Dismember) and Nicke Andersson (ex-Entombed), who in the olden days, would result in a Sunlight Studios-type production job, yet it appears Estby and Andersson have traded in their fondness for chainsaw guitars for sounds right off of High Voltage. Not unlike another AC/DC worship band we checked out this year, 77, Bullet hones the Aussie’s sound to a T. The only difference between 77 and Bullet are the vocals, essentially.

There are of course, a surplus of catchy, 4/4 vintage rockers, most notably opener “Midnight Oil,” and “Rolling Home.” In fact, “Rolling Home” might be one of the better AC/DC faux cover songs in recent memory, as it’s bolstered by a simmering pocket groove and Hofer’s jugular-scraped vocals. Beyond that, the Swedes ride on via the twang of “High on the Hog” and “Rush Hour” to the betterment of Angus Young devotees worldwide, occasionally stealing a Young solo note-for-note, and employing AC/DC’s patented gang vocal brigade. And if you can stomach Hofer’s near-comedic vocals, then Bullet becomes more enjoyable than offensive.

Occasionally, it’s okay to turn a blind eye to total sound thievery. It’s not tolerable and never should be, yet Bullet’s harmless joyride through Brian Johnson-era AC/DC warrants a spin for curiosity’s sake. Who knows, maybe the bad boy boogie of “Rolling Home” would accumulate some converts. If not, there’s always the real thing.