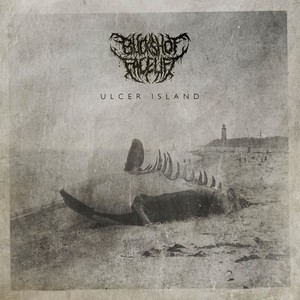 Cutting their teeth over a number of years at this point with smaller releases, Buckshot Facelift have also undergone some evolution to match it. Consisting of members now also involved in Artificial Brain and Grey Skies Fallen, the collective death/grind/powerviolence act has been moving from more abrasive and short material into something more unique and dastardly (see Elder’s Rasp and Living Ghosts of the North Shore) and Ulcer Island continues this forward and intriguing motion.

As Ulcer Island itself is a conceptual album, with a narrative that shifts from a “oblique street level view into dreamlike introspection,” it allows for some wiggle room within the formula. Buckshot Facelift’s approach to the album alone worth mentioning for its directional changes – going with the narrative, there’s a more abrasive and powerviolence/grind-laden feel to the beginning of the album, which slowly and gradually veers more into death metal territory. Opening cuts like “Czech Yourself” and “Afterbirth Puzzle” all but explode with raw and seething energy over their less than a minute runtimes. As the track lengths increase, there begins to be a darker and more brooding feeling to the album. Things start to truly shift with that of “Comptroller Cult,” and become more pronounced with time. The album never loses its visceral edge, but songs like “Don’t Hang from the Pipes” also become more melodic at times, interjecting frantic death metal riffs (and Will Smith’s low gutturals) with some slight bouts of dissonance and terror (“Delusions of a New Age”). It all makes for a journey that stays remarkably compelling and fresh from start to finish, particularly with the powerviolence/grind elements.

While Buckshot Facelift have been more relegated to the underground, what they’ve done on Ulcer Island is indeed worthy of some higher-level attention. Delivering a sound that stays unquestionably extreme while giving the entire process a fresh coat of paint – Ulcer Island is a fascinating beast.