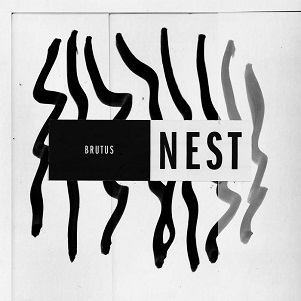 Examples of bands with the drummer as frontman/woman are few and far between unless we want to dial up early Deceased and Exciter and surely a handful of others that are eluding this scribe’s brain. Belgium Brutus, on the other hand, may just be the first band in recent memory to truly get excited about with regard to this configuration. Their drummer, Stefanie Mannaert, also doubles as the band’s vocalist, giving her twice the amount of responsibility and understandable live show fatigue. See, Mannaert is an accomplished drummer and singer, simultaneously banging out polyrhythms on the drums while unleashing a torrent of high, melodious vocals that caterwaul over what best could be described as metallic hardcore. The end result on the band’s second studio foray, Nest, is an album that exists beyond boundaries.

Indeed, Mannaert drives the thing (let’s not diminish the value of bassist Peter Mulders and guitarist Stijn Vanhoegaerden, though). She’s got the sort of breathy, almost indie, with one foot in hardcore and some in metal voice that is capable of spiraling melodies (“Fire” and the poppy “Techno” would apply here). Album highlight “Django” is a colossal, bursting array of propulsive hardcore with the dynamic might, in particular, Mannaert’s chorus choices powerful, strident drumming. But, for as chaotic as Brutus’s music can be, there’s a certain degree of fluency and control. “Carry,” as well as “War,” with its steady build-up, then go-for-broke ending, are both stocked with hooks and crisp, sideways riffing, sounding beyond what a normal power trio should produce.

Brutus has already been named dropped by the likes of Lars Ulrich and members of Dillinger Escape Plan and Thrice, meaning, their time is coming. Nest delivers on all fronts. Let the hype come their way.