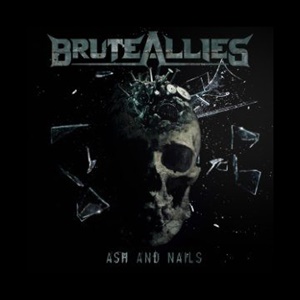 Combining a modern mix of thrash and death metal, BruteAllies reside in Manchester, United Kingdom – releasing their debut record with Ash & Nails. The quintet has established themselves on the local front, performing in the club scene as well as opening for Fleshgod Apocalypse to gain proper seasoning – seeking out producer Ivan Panferov of Anthropocide Studios to record these six songs. Choosing lyrical themes of human life losses in a post-war existence and the realities that occur because of war, it mirrors the sharp riffing and vicious attack mode the quintet portrays from a vocal/musical standpoint.

Much of the melodic accents occur in the dual guitar activities of Luke Michniewski and Sonny Fox – intertwining aspects of Lamb of God, Annihilator, and Testament when it comes to their picking, riffs, and engaging, circular lead spots that they pick out. Look into their fluid back and forth rhythms and subsequent accents/harmonization throughout the heads down thrasher “Battlefield” or the unrelenting, staccato-fueled follow-up “Dark Army” to understand these gentlemen possess brutal intent along with modest finesse to create memorable passages listeners will engage with incessantly. The death angles come out through the speedier tempo angles and gruff to screaming delivery vocalist James Bridges employs – “Nemesis” roaring out of the gate before twisting into a surprising clean guitar maneuver at the 0:44-0:53 portion, his caustic power containing a mix of Carcass/Decapitated-oriented thunder. At six songs in twenty-six minutes, things move along at a fairly steady clip with enough diversity to go between more controlled, aggressive offerings and the occasional blitzkrieg tracks where you can imagine swirling pits of madness or endless crowdsurfing/stagediving action circulating.

Ash & Nails should be a great effort for BruteAllies to establish themselves, and hopefully as they gain a bit more time, experience, and gigs under their belt spread more of their own take on the modern thrash/death style they are pursuing.