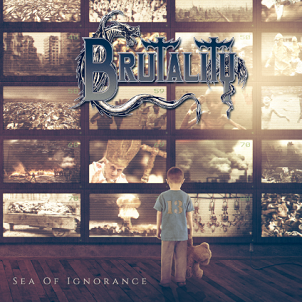 There is no better time than the present for a classic death metal band to release a comeback album. Since time is of the essence, we will not list all of the throwback outfits who have gone on to release material that is equal to, or better than their ’80s and ’90s output, but it’s important to keep in mind that none of these bands are doing it to re-live past glories and pad their bank accounts. Death metal has never been about that, obviously. In the case of Tampa’s Brutality, it’s an opportunity to scratch a 20-year itch with Sea of Ignorance, which was originally released by the band last year but is seeing European release via Mighty Music.

Brutality’s mid-‘90s output on Nuclear Blast would have put them right in the thick of the ballooned death metal scene, a bubble (or balloon) that eventually burst toward the end of said decade thanks to black metal. Even today, the band plays fundamentally brute, near-technical death metal, with one element not overriding the other, which is to say, the band is jack of all trades, but master of none. The visceral pounding on “48 to 52” and “Barbarically Beheaded” feel like ample looks back to vintage DM where there was always focus on a few central ideas in a song to bring one’s point home. That’s often the case for Brutality, who often find themselves between basic death and fluid technical death. (Big ups to the band’s cover of Bathory’s classic “Shores in Flames,” too.)

Brutality’s well-received but hardly world-beating comeback is emblematic of their standing in the scene when they originally bowed out in 1998. Sea of Ignorance, for its adherence to nearly all Floridian death metal principles, finds Brutality picking up right where they left off, essentially, and reclaiming their position as one of the scene’s true pillars.