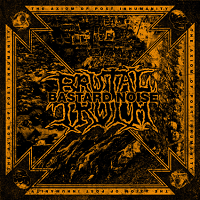 Two girls, one cup, Chuck Palahniuk’s “Guts”, the one hour gallon of milk challenge, the latest Justin Bieber album: all mental tests to see how masochistic one can be.  A split between grind legends Brutal Truth and Bastard Noise, drummer Rich Hoak has specifically stated that this album will “fry your brain.”  At almost an hour and 40 minutes (if you pony up the cash for not one, but both versions), The Axiom of Post Inhumanity is truly designed to test the listener’s tolerance for ear torture.

Anyone expecting anything close to Brutal Truth’s traditional grind will most certainly walk away from this disappointed.  The closest you will come is “The Stroy,” which  includes some roars and some distorted guitar but the added effects kill any form of entertainment you might derive from it, unless you are into annoying bird chirping sounds and tons of feedback.  The other two Brutal Truth tracks (using the word “song” cannot be justified) are long sequences (18-23 minutes each) of ambient background music.  Think sci-fi movie before the excitement starts, just exiting the spacecraft to explore or being lowered slowly into a cave.  While there’s nothing terrible happening here, the songs meander about long past their welcome.

The Bastard Noise part of the split can only be described as a cross between the air being slowly drained from a balloon, a computer sneezing, a dentist’s drill, and an old Atari that someone is desperately trying to play after taking a sledgehammer to the speaker system.  Truly noise for noise’s sake, this reviewer thinks it possible to recreate this portion of the album using one of those cheap dollar store sound effect buttons once the battery has drained down to low.  Do your best to avoid these tracks unless you have plenty of aspirin handy.

Even Brutal Truth fans will find this extraordinarily hard to swallow.  While it does fulfill its promise of frying your brain, it’d be better to hear Brutal Truth doing what they do best.  Experimentation is one thing, but this just goes to far. 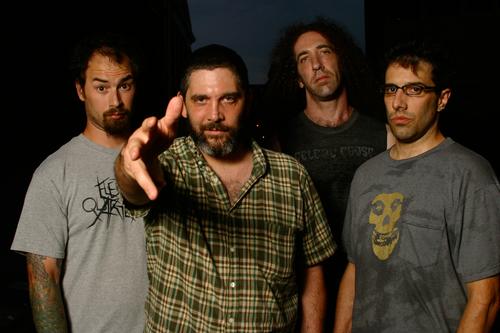