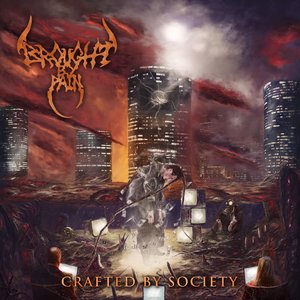 Just when you thought 2016 was done dolling out the strongest albums of the year, comes Brought By Pain’s second EP, Crafted By Society. Five years and some line-up changes since The Dreamer’s Will, the band notably contains some Beyond Creation members Kevin Chartré and Hugo Doyon-Karout, along with ex-member Guyot Bégin-Benoît. The musical result shouldn’t be too hard to guess from there.

Sure, its technical death metal with some striking musicianship, but it is also an intense listen. Containing only three tracks, the roughly 17-minute EP doesn’t sound as much like Beyond Creation as you might expect. There’s a thrashy and direct assault that comes through alongside the more progressive and technical elements that one would expect. A lot of full speed ahead moments lie in wait, but the complex riffing structures keep them from sounding too similar to each other. The urgency persists with each song, and while the tech boxes are all checked (including the fretless bass), it’s a rather listenable experience and you’ll find yourself thrashing along before the opener, “Ending,” hits the midway point. The catchiness factor is in fact Brought By Pain’s strongest asset – in a world where the tech factor can go through the roof, it’s being able to merge that with something that stands up as being emotive and memorable that is key.

While it is a short listen, it’s another example (along with Cryptopsy’s last EP) that perhaps more technical material is best enjoyed in short spurts. Crafted By Society is loaded with moments that will make you go “wow,” but you’ll also be humming along those parts later in the day. A must for fans of Beyond Creation (of course) and First Fragment.