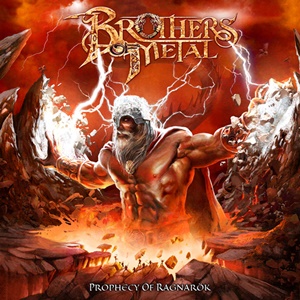 Eight warriors from Falun, Sweden congregate in the name of all that is glorious about heavy/power metal – looks and all – welcome to the debut full-length from Brothers of Metal. Donning historical outfits ready for battle centuries ago, the magnificent warrior bursting through earth with fire on the cover clues the public in on a resounding, anthem-oriented record, featuring many obvious reference points to ensure immediate acceptance for many in metal’s coven of followers. Featuring three distinct voices (two male, one female) and three guitarists beyond bass and drums, it’s clear they can cover a wide array of textures and serve up dynamic arrangements track to track for maximum versatility.

Clichés abound in this specific genre – be it lyrically (“Defenders of Valhalla”) or musically (cue the keyboards acting as a triumph of horns during “Siblings of Metal”) – but Brothers of Metal attempts to offer slight twists in terms of the mix of gruff and clean melodies, plus guitar play that encourages harmony extensions. You will probably think of Manowar and Hammerfall when taking in these stories of battles, fire, steel, Odin, Vikings, and warriors – and the music can be very folk-ish one moment (“Defenders of Valhalla”), or power metal ballad supreme the next during “Freya” – qualities that embrace the current breed of leaders in this genre like Sabaton and Powerwolf. These musicians revel in that mid-range capacity that encourages easy audience participation engagement – whether you’ve imbibed one drink or many. Feel the steel banging away during “Son of Odin”, the evil contrast and swinging riffs for “The Mead Song”, and the consistent rhythms that drive “Fire Blood and Steel” to know that Brothers of Metal aim to take the listener from daily stress and struggle and channel those feelings into a perfect power/heavy metal catharsis.

Prophecy of Ragnarök has polarizing capacities because it’s not really striding into its own path but rather taking together many expected elements for riffing, melodies, and hooks – and throwing them all into this comfortable aural stew. Which to some could be a huge turnoff, and others will treasure it (the new breed of Sabaton/Powerwolf fans). Curious to see how this plays out as the band gains more traction live.

Brothers of Metal – Dancing on a Thin Line 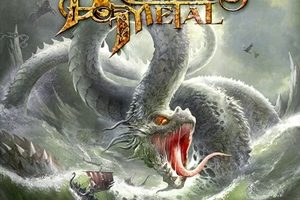