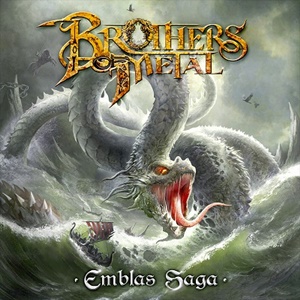 Returning for their second record, Brothers of Metal sit in that dramatic power/heavy metal template for Emblas Saga. Embracing that historical context in lyrical content as well as personal imagery, the assets for the band include a triple threat vocal approach beyond their catchy guitar trio, bass, and drum components. As a result, you get a thirteen-track album that contains this dramatic versatility that keeps the anthems flowing, where hooks, harmonies, and chorus melodies abound in this swirling amalgamation of what’s put Sabaton and Powerwolf at the top of their game but also taking into consideration the importance of Manowar and Hammerfall to these compositions.

The immediacy of straightforward heavy metal riffs and steady double bass work makes “Chain Breaker” an easy front half favorite – a Teutonic-driven affair where the booming chorus elevates the energy into 80’s Judas Priest or current Primal Fear-ish comparisons. There are plenty of circular guitar patterns that bring those cultural/Celtic-oriented melodies to mind – opening up the dual male/female harmony possibilities on the vocals, or setting the stage for the warrior/battle-laden tales in different voices, as “Theft of the Hammer” cuts through the aural landscape in a heavy Powerwolf-like manner, even with the calmer narrative transition midway through. The acoustic-driven ballad “Weaver of Fate” with its orchestral splendor and calmer atmosphere gives vocalist Ylva Eriksson a chance to open up some of her resplendent upper register and grace during the verses. Although most of the songs seem focused and to the point in a radio-oriented three-four minute timeframe, the longest track at 7:14 happens to be the title track – its vocal-oriented start transitioning into a heavier epic where the male vocalists set up the adventurous story line where ‘distant echoes’ come into play for ‘the children of Wodan’, history and mythology bursting with life.

Add in the wild silver and grey cover art with the wild sea monster against the ship and stormy seas and it wraps the Emblas Saga package neatly into high expectations for Brothers of Metal. Playing to their strengths, they aim to take the listener on a journey hundreds of years in the past – and succeed in bringing together a style that is power/heavy with folk/cultural inflections, pretty catchy, and ready to be received with rapturous applause.

Brothers of Metal – Dancing on a Thin Line 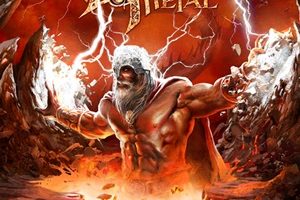