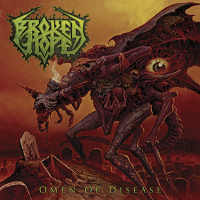 About as undervalued of a death metal band going in those overloaded mid-90’s, Chicago’s Broken Hope enjoyed moderate success before bowing out in 2001. It might not be fair to say they became unfashionable around that time (since, you know, when has brutal death metal ever been en vogue?), but it was probably a good time to hang it up and pursue other avenues. Since then, quite a bit has transpired (including the tragic suicide of singer Joe Ptacek in 2010), but now seems proper for the band’s patented gore-soaked/immediately catchy technical death metal, which is where Omen of Disease comes in.

New vocalist Damian Leski has the gurgled/indecipherable approach down pat, ensuring that the band’s circa-1993 credo was left intact. And while certain segments of Omen of Disease sound familiar, there’s suitable packs of thrust in the riffs, specifically on “Rendered into Lard,” which should become a mini-classic thanks to the song’s halfway point sound bite about a family sitting down to eat human flesh. Creepy and funny at the same time. Beyond that, look out for the quick snap of “The Docking Dead” or the stalwart tremolo action on “Give Me the Bottom Half,” which is pretty much how a head-snapping brutal death metal song should sound without going full-bore into finger exercises.

There’s little in terms of anything fresh coming out of the brutal death metal scene at the present time, so it’s up to the holdovers of the style (Cannibal Corpse, Suffocation, and obviously, Broken Hope) to pick up the pace. Broken Hope seem to have weathered their time away rather nicely, returning with an album sure to satiate the sick and twisted, while going a long way toward to impacting their legacy as something more than a second-tier 90’s death metal act. They’re much more than that.