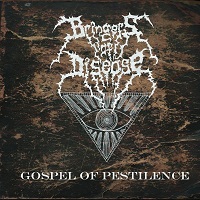 Gospel of Pestilence is what happens when two bands

of disparate styles (Mouth of the Architect and Acheron) get together to kick around some vintage and necro black metal in the form of Bringers of Disease. The two bands couldn’t be further apart (save from the fact they’re both from Dayton, OH), with Mouth of the Architect being one of the upper-echelon post-metal bands, while Acheron has been a mainstay on the American death metal scene for well over two decades. Of course, this doesn’t automatically result in something glorious, which this 4-song EP is definitely not.

Looking to latch onto the buzzed USBM sound, the band open things up with “Doomed To Flames,” where scathing chords collide with an all-out blast attack that has been done a trillion times, yet is still successful when done right. “Your Prayers Remain Unheard” traverses down doomy death metal territory, not terribly dissimilar to classic Incantation. “Our Final Reward In Hell” runs in the same vein as “Doomed To Flames,” albeit with a distinct Norwegian flavor, while “A Plague To End All Plagues” ends up being the pick of the litter, with a shake and rattle (i.e. lots of clunky thrash beats and potent speed-picking) that recalls the unheralded Dodsferd.

A fun idea on paper (since when is black/death metal supposed to be fun?), Bringers of Disease add little or no value to the swell of USBM bands. However, if the two bands really put their minds together, an atmospheric-meets-brutal-death metal concoction would be infinitely more interesting than Gospel of Pestilence.