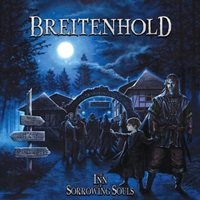 Mega-prolific Swedish metal musician Ced (real name Cederick Forsberg) has numerous projects and bands running concurrently. Rocka Rollas up to their fourth full-length in the past five years, while also recording two albums with Blazon Stone, plus everything from thrash to doom in other projects – beyond the product before us in Breitenhold. And he’s a robust 26 years of age! Some guys have the ambition, drive, and determination to muster as much creative energy and push consistent output to the world, we only hope that there are enough worthwhile songs to make it a preferred time investment for the listener.

With Ced handling all the instrumentation and vocals, The Inn of Sorrowing Souls contains 9 songs of total German power metal worship to the highest Blind Guardian/Helloween degree. All the requisite layered guitar harmonies, epic marching strains, and mead-hall oriented choruses that pushed them to headlining status by Tales of the Twilight World appear right out of the opening high octane runs for the title cut – and never relinquish even as the mid-tempo echo chords for “Another Way” conclude. Amid the speed and dexterity, Ced always makes sure that melody and hooks are thrown in from a vocal and musical direction at least four or five different ways – which helps “Haunted Dreams” and the six minute plus “Light the Fire” become lodged in the brain recesses rather swiftly.

The first half of the record holds up better than the second half – possibly a case where Ced struggles to deviate much dynamically from a particular Teutonic formula. “Halls of Steel” being the biggest yawn-inducing offender, the drawn out low to high vocal melody could cause certain individuals to walk away. And the helium-oriented falsetto nature to the man’s vocals will make many think of early Nocturnal Rites or the first three Elegy albums if put through the Kai Hansen filter.

Don’t get me wrong – Breitenhold affirms a passion for a bygone era in Blind Guardian’s history – where the orchestration wasn’t so prominent and the band generated its speed through the guitar/drum combination. And as a result, this second full-length will find a home in a lot of bards hearts.