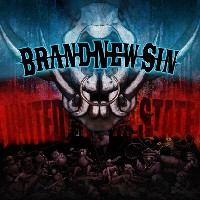 A classic example of a band that should have blown up big but never did, Brand New Sin have spent the better part of their existence licking their wounds from lineup issues and record label squabbles. It’s a tired story, not limited to just BNS, but listening to a record like United State makes one think about what could have been if these gents had some real backing (and luck) when they were coming up.

Now fronted by guitarist Kris Weichmann, BNS is still enamored with the Southern rock-on-metal sound, something that worked remarkably well on albums like 2002’s Recipe For Disaster and 2006’s Tequila. There’s always the chance for this stuff to sound inherently dumb being that it’s often lowest-common-denominator rock, yet BNS have veteran songwriting chops like you wouldn’t believe. They could essentially please both a redneck and hardlined metalhead. Not an easy task.

Anyway, United State has a swath of catchy jams to choose from, including “All My Wheels,” which is a pure-bred FM rocker. Same bodes for “Infamous” and “Bed of Nails” where 70’s rock riff action opens both songs

up wide for some easy rocking (and living). The metal has been turned down for the most part, so it’s the acoustic angle of “Rotten As Hell” and “Groups of 5” that provide the necessary reprieve from the boozle addled and saddled rocking.

Homegrown rock like Brand New Sin’s is a bit of a lost art these days, which is probably why United State gets its rocks off so well. It’s a bumpy road the band has taken, but the fact they’re still able to produce something of this quality with United State says a lot about Brand New Sin. You can’t keep a good band down.