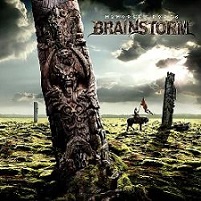 When a power metal band starts to level off, it’s almost a career death knell. Once you’ve peaked and peaked early (read: Primal Fear, Evergrey, Sonata Arctica), getting that initial flair back is next to impossible. We’re not entirely sure as to where Germany’s Brainstorm peaked, but we’ll point to their excellent Liquid Monster as the point of no return for a band now eight albums into their career. And if you’re wondering, Memorial Roots is no Liquid Monster. Great album titles, by the way.

Andy B. Franck) slowly started to pile up points via muscular riffing and anthem-worthy numbers that had more to do with meat and potatoes than cheese. Memorial Roots, when stacked up against the band’s prior output, is kinda puny.

Memorial Roots is a bit of a head-scratcher mainly because it lacks that muscle, that gusto the band had a few years ago. Sure, the biting “Victim,” and pounding “Blood Still Stains” are top-notch numbers, but in slides the reserved “Shiver” and restrained, tepid “Cross the Line.” There’s no real immediacy to any of these songs

, which is counterproductive for any power metal band, let alone one that has always existed on the fringe.

Most puny power metal albums would typically warrant a much lower rating, probably because they’re laced with over-the-top and velveeta. Brainstorm stays out of hot water for the time being because of their back catalog and the fact that a reserved, play-it-safe Brainstorm is a lot better than a dead-pan serious power metal band with no clue how lame they really are.