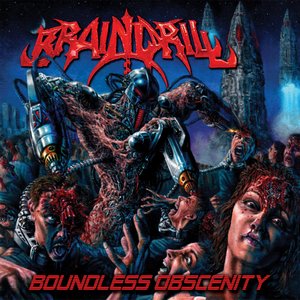 Those who’ve stuck with the more extreme side of death metal for a while no doubt are aware of Brain Drill. They made their name with 2008’s Apocalyptic Feasting, an album cited by many for it’s over the top technical riffing and frantic speed (certainly calling Origin to mind). After a second full-length the following year, the band packed it up and called it a day. But mainman and guitarist Dylan Ruskin resurrected the act, grabbing a new drummer and vocalist – Boundless Obscenity is the end-result.

One might recall Brain Drill as one act that seemed to take the excessive technicality to the furthest extreme, and was more about “being technical” than tossing the elements into an actual “song” (particularly on Apocalyptic Feasting). However, with aging, it seems the couple of years that the band went dormant had a solid effect on songwriting. Boundless Obscenity is no doubt exquisitely technical, but it’s also woven more into the songs. The title track has moments of spiraled and crazed riffs, but the band takes the time to slow things down with some well-timed groove – giving it a second to breathe before going back into the speed rush. “Domain of Ruin” has some melodic leadwork that also helps keep the songs memorable instead of being a speed blur. “Steadfast Horror” even uses some synths to give the music a heightened and epic sense to it that is quite impressive.

It seems that Brain Drill has accomplished some sense of balance to their repertoire, and Boundless Obscenity is a much stronger album for it. They’ve lost none of the wow factor that was always present, but have enhanced it by wrapping it up with songwriting that caters to it and brings it to a new level. An impressive comeback.