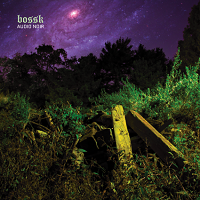 There’s such a tremendous disparity, or discouragement, or thrust-them-in-the-back-of-the-mix approach to vocals by Bossk that it makes you wonder why the Brits don’t make the full instrumental plunge. A “post-everything” (their words, not ours) outfit who has been mingling about for over a decade, Bossk indeed parlay the entire root, tree, and branch of the post-metal sound. The booming, quadruple-tracked guitars are in employ; same goes for husky-man vocals, of which appear, perhaps, 30% of the time. No joke. Yet the instrumental bits and bobs Bossk come up with across Audio Noir are at times, simply captivating. They could be the British Pelican (but better) if they so desired…

So yes, seven songs in which to work, with only a handful having actual vocal patterns and cadence. They’re utterly complementary players here, and frankly, don’t really add much to the proceedings. They don’t even make an appearance until the mid-way mark of the second song, “Heliopause,” which not surprisingly, is one of the album’s more bland numbers. Instead, the lush, swimming-in-atmosphere “The Reverie” (which opens the album) and more importantly, “Kobe” take the cake on Audio Noir. “Kobe” without question is the highwater mark here, a pensive, eerie, but calm number, designed around a post-metalman’s dream of a guitar pattern. And sure, the vocals pop in toward the song’s conclusion, but by then, it’s a race toward the playback and/or reset button. A simply magnificent song.

Bossk manages to add mounds of texture and care to most of the tunes on hand, thus culminating with “The Reverie Part II,” another song that saves for the vocals for the very end. On cue: Bossk can totally ditch any verbal or oral devices in their music. The music stands up just fine, thus resulting in a near-masterful post-metal effort that is worth the price of admission based on “Kobe” alone.