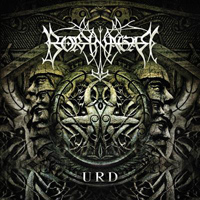 Blistering will never get into the consulting business (even though they make quite the chunk of change, apparently), but our review of Borknagar’s 2010 Universal did suggest that the Norwegians combine the vocal talents of current singer Vintersorg and then-former singer Vortex (ex-Dimmu Borgir). And sure enough, that’s exactly what happened last year: Vortex rejoined and Borknagar now has easily the most imposing two-headed vocal monster in metal. No one even comes close, meaning that a.) Blistering is really smart; or b.) We can make predictable suggestions at the right time. It’s a toss-up.

To the matter at hand, Urd is an obvious improvement over the aforementionedUniversal. It wisely takes numerous strolls down Bork memory lane, some of which even harpoon the band’s underrated The Olden Domain era (see: “In A Deeper World”). Yet for the most part, Urd sees Øystein G. Brun and the gang stay in the upward, quasi black metal realm, with a preponderance of sinewy riffs, atmospheric deposits, and of course, some vocal duels between Vintersorg and Vortex.

Opener “Age of Creation” is a fine piece of work, highlighted by a chilling opening riff and Mr. V’s superior vocal layering. “Epochalypse” and “Roots” both turn the black metal turnstiles, the latter of which is hoisted up by epic metal-tinged keyboard action from Lars A Nedland, while “Frostrite” heads to the glorious lands of 2000’s Quintessence, a direct result of Vortex’s burly man-roar. Vortex also has another shining moment on “The Beauty of Dead Cities,” where his vocals sound off a thousand triumphant trumpets, it seems like.

A cover of Metallica’s “My Friend of Misery” is expertly-performed, driven home by Vintersorg airy vocals (Vintersorg is one of this scribe’s favorite singers of all-time, by the way), and might be one of the better Metallica covers pulled off in recent memory. Elsewhere, the labored “The Earthling” and restrained “The Plains of Memories” both add several colors to Bork’s very broad and far-reaching palette.

Strange to say this, but Borknagar has never quite fulfilled their creative promise in over a decade, yet the pieces are in place for a worthy complement to 1998’s unbeatable The Archaic Course. As it stands in 2012, Borknagar remains one of extreme metal’s most lavish and undervalued bands. Methinks once people start to get a load of the twin vocal towers of Vintersorg and Vortex, they’ll be singing a different tune. If they don’t, then they’re idiots.