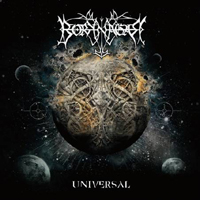 When Bork mainman Oystein G. Brun proclaimed Universal was a “return to form” (cue simultaneous sighs and eyebrow raising), we’re not sure what he meant. This isn’t akin to the glory days of the The Archaic Course. It’s not the advanced black metal offerings of Empiricism or Epic either. This is a form we’re not accustomed to with Borknagar; Universal is a safe, uninspired album from a band we’d never thought those words would be applied to.

Not counting the all-acoustic Origin (which is boring in its own right), Borknagar was forging a unique, challenging path with vocalist Vintersorg, who joined the band in 2001. Mr. V’s booming, one-of-a-kind clean vocals seemed to blend well with the stripped down black metal angle taken on the aforementionedEmpiricism and Epic, and on Universal, he’s in full command, lifting “The Stir of Seasons” and “Fleshflower” off the ground. The man may never be fully utilized, but at this stage, he’s no longer a far cry from ex-Bork vocalists Garm and Vortex.

Musically, though, Universal is very flat and that’s evident from the start with opener “Havoc,” a song that sorta peddles aimlessly with bland riff choices and acoustic guitars. Many a good melodic idea are slashed (see the clean guitar strumming during “Worldwide” for starters), causing the album to fall into this bland, listless haze. It’s something we’ve never dealt when it comes to Bork, obviously, so excuse our befuddlement.

Vortex (who was recently dismissed from Dimmu Borgir) does do a major salvage job on album closer “My Domain” and as expected, it’s every bit the gleaming, pompous quasi-folk sonofabitch that made Bork unstoppable circa 1998-2000. Vortex’s voice fits the band like a glove and “My Domain” serves as the album’s single high point. Here’s a thought: a Bork album with both Vintersorg and Vortex. Now that would be a world-beater.

A lot went wrong here and one would think with the amount of bands regularly aping Bork’s vintage Olden Domain/Archaic Course sound, there would be some impetus to rise up and show everyone how it’s done. Unfortunately, we got none of that. Universal is a near-flop…only their good name and relative good-standing keeps this from being a total wash.