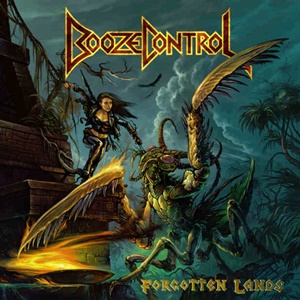 A decade into their career, German metal band Booze Control have evolved. Originally developing from an alcohol-oriented rock angle early in their career, watching Iron Maiden’s Beast over Hammersmith live video fueled the band’s desire to crack down on their songwriting and performances for their 2013 Heavy Metal album. Forgotten Lands is the quartet’s fourth album and debut for Gates of Hell Records, a sub-division of Cruz Del Sur Music – a proven entity in the realm of traditional metal and its offshoots. All signs point to these musicians aligning with the early aesthetics and raw, unbridled energy that made the NWOBHM special – just throwing a bit of their own Teutonic stamp on the proceedings.

One of the interesting things about Booze Control is their ability to stay in a similar mid-tempo pocket with marching, triumphant riffs and steel-oriented transitions, building lead breaks and hooks that possess cultural relevance a la Thin Lizzy, Manowar, and of course Iron Maiden. It can start with a pumping bass-line for “The Nameless” or a simple tom roll for “Spellbound”, but the band wastes no time getting to the heart of the song – alert to catch the listener early and keep up the engagement track to track. It’s clear that lyrically the band favor swords, mythology, and fantasy fare based on “Doom of Sargoth” and “Slaying Mantis” alone – and the distant, outer dimension voice of guitarist David Kuri fits like a glove to the primal tones and production work these ten songs have. The lone epic appears at the end, the 8:07 “Cydonian Sands” – the quieter sections evoking Steve Harris-like atmosphere, while the steady rhythms and guitar support sure to rally the troops as David and second guitarist Jendrik Seiler elevate their game through solid acoustic and electric switch-ups. Another wonderful aspect for metal fans to eyeball is the way the cover art ties into multiple songs on the record – give me haunting illustrations over computer-generated graphics any day of the week.

Booze Control appear to be very confident in this NWOBHM meets German approach displayed on Forgotten Lands – and it’s quite charming. While the younger generation may scoff at the lack of polish, the early purveyors and supporters will dig this material, and it’s the type of album that could be a grower through repeated exposure.