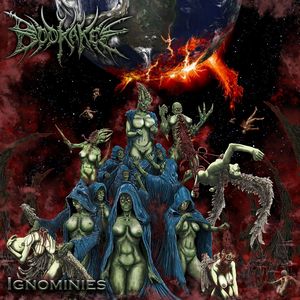 While the tag-line of being Canada’s answer to GWAR works in the sense of Bookakee’s live show, with costumes and gore galore, don’t expect them to be something musically similar. Instead, the act falls well into the technical/progressive end of the spectrum. An act that feels distinctly Canadian in their quest for chaotic tech fireworks and progressive quirks. Certainly something that gives the band some enjoyable eccentricity throughout Ignominies.

Ignominies starts with some wild and intricate riffing atop of plenty of frantic drums and psychotic vocal lines. It’s a thrilling beginning, and “Monarch of the Depraved” does start to show more progressive and melodic leanings as it continues onward. The album maintains this intensity with many of the opening tracks, and each has its own distinct way of incorporating some odd or quirky melodies into the flow (such as the title track). If Benighted is starting to come to mind due to the level of chaos and their ability to take the music into some strange (yet satisfying) directions, one won’t be surprised by the appearance of Julien Truchan on the song “Bréhaigne,” which brings things to another level of energy, even amid some intriguing clean guitar and proggy segments. Things really go off the rails by the time the intermission arrives, and the band goes into a Super Mario World track (“Mario Whirl”) and successfully turns it into a tech-y monster before going more progressive and relaxed for “Refuge Insidieux.” The band returns for more tech-death hijinks following the intermission, but it should be noted that the 11-minute “Celestial Decimation” does a nice job of breaking through the frantic nature of the band’s shorter material and provides some more atmosphere to keep the track fresh.

An interesting album that is easily definable by extreme metal standards, but finds a way to stand out by including some quirks that still stay in line with the band’s musical message. Not mere gimmicks, but well-thought out inclusions that make Ignominies an album worth investigating if you crave some explosive material that finds a way to surprise you.