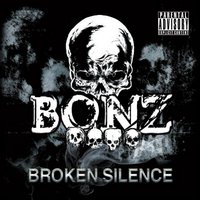 Stuck Mojo, who enjoyed a run of unlikely popularity circa 1998 with their Rising album (who can forget the WCW tie-in?), were for a stretch, the prime example of a rap metal band capable of underground acceptance. The fact they were on Century Media for most of their career didn’t hurt, as often one’s label lends instant credibility. But Stuck Mojo mostly had the goods and were much heavier (and better) than their so-called contemporaries parading around in the nu metal scene. The man out front was Bonz, who was unceremoniously dumped from the band in 2006, only to return as recent as late 2014. In the interim, Mr. Bonz was able to spit out a solo album in form of Broken Silence.

Rapped vocals in metal – take it or leave it – can either be numbingly banal, or in the case of Bonz, have legitimate flow. He’s always had a youthful spunk to his vocals, not so much as street-tough as they are socially aware, something that translates well across cuts like opener “Sinister Grin,” “30 Seconds to Swat” and the frothy “Sour Diesel.” Musically, there’s an abundance of groove-laden riffs, which as expected, aren’t terribly too far removed from classic Stuck Mojo. However, one has to think now that he’s back with Rich Ward, Bonz’s vocals will even more of a significant presence on record.

Frankly, if one is able to take on or enjoy the confluence of rapping and metal, then Bonz, along with Stuck Mojo, Biohazard, and the first band to really give this style a run, Mordred, should suit you just fine. If anything, it’s indicative of how malleable a form of music metal is. In turn, Broken Silence finds Bonz right where he belongs in the maelstrom of modern metal and soulful rapping. Curious to see what a new Stuck Mojo will bring…