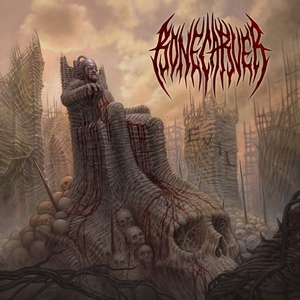 The name Cannibal Grandpa doesn’t really inspire much confidence as a brutal death/deathcore act, to this scribe at least. It sounds like a quirky grindcore act, come to think of it. Apparently, the band thought it was time for a change as well, becoming Bonecarver and also signing to Unique Leader Records for this new offering in Evil. Frantic, occasionally slammy, and groovy death metal can be found within.

A whole lot of modern death metal and core can be easily dissected from Bonecarver’s sound. It’s not a bad thing, but that’s the one piece that does keep them from being a more standout act. Deathcore chugs, bree-bree vocals, and the like soak songs like “The Blacksmith’s Massacre,” and lead into predictable breakdowns later on. “The Scythe” does this a bit too, relying on chugs and an all-too-familiar shift between high speed blasts and chugging breakdown territory. While there are some tracks that stick to this format, the bright side is that there are also a good chunk of them that don’t. This is where the band sticks out more, like the urgent and raging “Hound Pound” that flies forwards with such intensity that it feels about to go off the rails at any moment. Touches of atmosphere and darkness permeate other songs like “Overtorture” and lead them into more melodic moments, some of which have an almost black metal feel. The title track finishes the album with this feeling too, bringing the band into more ‘epic’ sounding territory that seems primed to exploit in the best way with future offerings.

Evil takes the first steps for Bonecarver to expand themselves into worlds beyond deathcore. If they choose to flesh out their material, they could very well lead the way into some very intriguing territory in the futures. Evil isn’t bad, but those notes of familiarity keep the band from reaching greater heights.