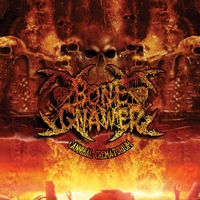 One of the biggest bands of the underground old school death metal movement has to be Bone Gnawer. Originally spawned by death metal workhorse Rogga Johansson and the legendary Kam Lee, this second full helping lacks Johansson but the message still remains the same – this is death metal that has been completely stripped of the flash and fat, right down to the bone (pun intended).

Those familiar with the band through previous full-length Feast of Flesh or their assorted smaller releases should know the drill. There’s little to no surprise that is waiting around the next riff. But that’s also been the band’s mantra since the beginning. There’s a slew of guest musicians from start to finish though, with almost every track referencing that it features someone of significance. The bigger names that pop up are that of Dave Ingram, Vincent Crowley, and Mark Riddick.

This adds up to a lot of “selling points,” but how’s the music? As already stated, it’s about what you’d expect. The band’s best features are that of the riff department. This isn’t a play at a thousand miles per hour type of band, so the subtle melodies and groove on display often give the band it’s flavor. Some of the highlights include the uptempo and flat out fun riffing of “Chainsaw Carnage” and visceral flair of “Chawed, Mauled, & Gnawed.”

If you are looking for some straight-forward death metal that doesn’t sound stale, Cannibal Crematorium will scratch that itch. It may not deviate from the death metal playbook, but it’s an effective and enjoyable romp while it lasts. 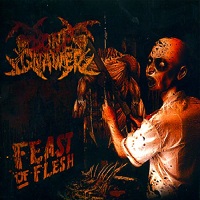