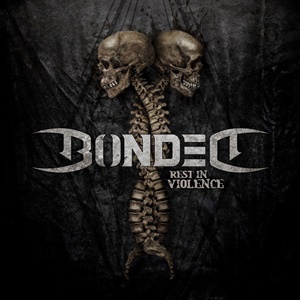 Leaving a prominent German thrash act such as Sodom already gives you a head start when developing a new act – and such is the case for Bonded. Former members guitarist Bernd Kost and drummer Markus Freiwald set about finding the ideal quintet – recruiting fellow ex-members of Suicidal Angels and Assassin among others and recording this debut full-length Rest in Violence. At this point in the game, do not expect the band to deliver anything but what is comfortable to their desires – and you’ll get an exercise in old-school thrash that is versatile and aggressive, showcasing the intensity and energy that this music should deliver when executed in a ferocious manner.

The twin axe attack Bernd and Chris Tsitsis employ allows the band’s sound to fill more powerful landscapes and build the sonic atmosphere into a wider array of melodic to aggressive overtones – evident right away through the semi-marching gallops and catchy refrains of the mid-tempo opener “God Given”. When wishing to raise the tempo bar with slicing mechanics and heads down thunder that includes semi-blast beat passages, look no further than “Suit Murderer” for adrenaline-laced crunchy rhythms as well as the roaring, rapid-fire vocals from Ingo Bajonczak as his pleas and screams cut to the bone. Aware of the fact that dynamic spots allow the pace of the album certain aural relief, “No Cure for Life” as a slower arrangement still throws down some killer doom-like groove riffs, almost channeling a bit of Crowbar textures with some conventional melodic metal nuances during the chorus. When Bonded choose to be militant and forceful, the results are relentless – “Arrival” a latter half favorite as the double kick intensity and speedy twists and turns sure to appease even the most cynical thrash maniacs to become a believer. You also get some big-time guest support vocally on the title track with Bobby Blitz of Overkill and ex-Kreator bassist Christian ‘Speesy” Giesler lending their skills for the very Kreator-esque gallop-oriented number, the riffs and hooks transporting the listener back to the origins of the movement during the early to mid-1980’s.

When you have seasoned musicians familiar with a style for decades and put them together in the right circumstances, the quality should rise to the top of the chain. That is the case for Rest in Violence – and hopefully the right touring/festival situations will aid their ascent into a deep affinity for the fans to know, Bonded mean business and keep the thrash movement alive and kicking. 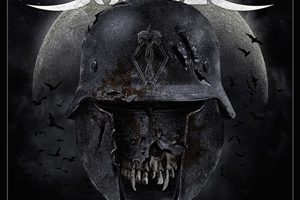