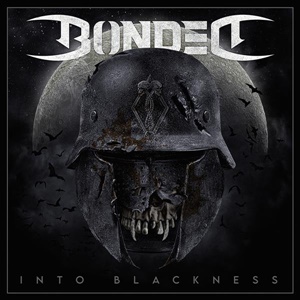 Wasting no time releasing the second album Into Blackness after issuing last year’s Rest in Violence debut, German thrashers Bonded aim to prove that seasoning and experience pay dividends once again in establishing credibility. Those in the know are aware of the past resumes of these musicians – now it’s only a question of putting all the skills on the table and developing a potent sound for themselves. These eleven tracks (thirteen if you get the first edition CD with two bonus cuts) combine the influence of melodic, Bay Area precision along with the expected German potency and finesse – stirring up a cauldron of energy much like artists who have been around since the 80’s/early 90’s should.

A mini storyline of four tracks tackles a wartime theme from the Richard Rhys Jones fictional novel The Division of the Damned. Starting with the spiraling “Lilith (Queen of Blood)”, moving through “The Holy Whore” that contains numerous melodic/power branches as well as a forceful chorus from vocalist Ingo Bajoncazk, into a modern-like Nevermore-ish effort for “Division of the Damned” before “Into the Blackness of a Wartime Night” sews things up in pummeling thrash fashion – you gain insight into all shades of the Bonded template. Another year together makes all the difference in terms of tightness, growth, diversity, and attention to the smallest details – the production values and tones precise, giving the band a sound that is crisp, potent, metallic and ready for the stage. Even on a more controlled, slower arrangement for “Destroy the Things I Love”, you’ll get tremendous fill support amidst the normal groove-accented drumming from Markus ‘Makka’ Freiwald that enhances the main musical hook for maximum headbanging ecstasy. The two-guitar lineup with Chris Tsitsis and Bernd ‘Bernemann’ Kost combine for plenty of speed riffs, crunchy transitions, and fluid lead breaks – check into “Ill-Minded Freak” and “The Eyes of Madness” for their wide array of licks, tricks, and decades of abilities on display.

Injecting a strong melodic element in the music and vocals should help Bonded stick out even in a genre like thrash. Most ardent followers of the movement should add Into Blackness to their already hefty collection. 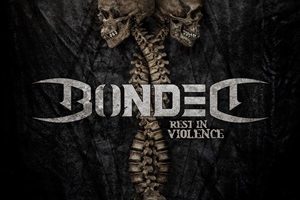