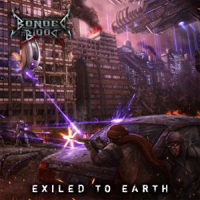 At this point in the latest young regeneration thrash wave, most bands can’t rest on their laurels if they hope to sustain any sort of career musical aspirations. Sure your debut effort may resurrect a new legion of fans who never experienced the first wave in their prime- but those unwilling to part from their heroes influences may be laughed off into obscurity.

This California band certainly will not deny their adulation for all aspects Exodus, and those rudimentary elements continue on their second album, Exiled to Earth. Gang vocals, lead trade-offs that are acrobatic, finger gymnastics, and piles of riffs that run over and maim your auditory channels are three methods for Bonded By Blood’s madness.

Yet the verbal assault from Jose Barrales on tracks like “Prison Planet” and “ Sector 87” rivals Sean Killian of Vio-lence notoriety with a lot less wild banshee whining. Carlos Regalado’s drumming on “Prototype: Death Machine” rivals some of the best examples of finesse and cymbal/snare tempo juggling without coming off sloppy or uninspiring.

The guitar soloing pushes both axe slingers Alex Lee and Juan Juarez much like the great days of Iron Maiden or Judas Priest. You hear in the faster sections they are headed for the Autobahn and yet they willingly keep their play in key and often will spread out their measure choices in small bursts – best examples being “Blood Spilled Offerings” and “Episodes of Aggression.”

While 2008’s Feed the Beast paid evident homage to the Paul Baloff era of Exodus, Exiled to Earth proves Bonded By Blood also enjoy the exciting eras of Death Angel and Forbidden these days when forming their songwriting, arrangements and gang attack mentality in the studio. As long as you know they aren’t re-writing the textbooks of thrash, I believe Exiled to Earth contains enough entertainment to get most fans of the genre what they desire.