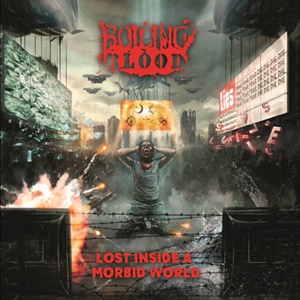 An intro that includes a familiar iPhone cell phone ring tone, a woman answering, and a Beelzebub-like demon makes for an auspicious start to a record, that’s for sure. Welcome to Boiling Blood – a German thrash band active since 2003, releasing a demo in 2005 and a compilation CD in 2011, then dealing with numerous lineup shuffles before arriving at their latest full-length, Lost Inside a Morbid World. Glad to see that the quintet haven’t lost any iota of deliver given the eight-year gap between releases – as this is some heads down, street-level pummeling not looking for commercial acceptance, putting the onus on proper riffs, potent choruses, and individual songs that possess character and atmosphere even as they crush your soul.

Stop/ start guitar propulsion and melodic twists give Ingo and Jochen ample chances to display tight maneuver and a wall of sound that is the foundation that thrash needs to succeed – “Morbid Delusion” rearing up to early classic status for the band, delivering some delightful taps and whirring breaks beyond the rhythms that bring up early Metallica, Heathen, and a pinch of Exodus to the mix. The gallop nature giving chase to ethereal breaks and shrieks/gang vocals makes “Circle of Life” a left-field affair many may treasure, a track in two-minutes and change that reveals some of their natural Teutonic influences. Occasional early death tremolo picking can provide the diversity one needs in a thirteen-track record – “Emerged From Blood” reminding this scribe of early Death colliding with a bit of Slayer circa South of Heaven as the slower/evil nature goes head to head with some slamming tempo changes and fierce double kick action. Some experimental activities do not work as well as others – the keyboard swirls and shouted vocals against alternative-like riff parts for “Lost” could be seeing the skip button for some listeners, but you can always return to the political/social commentary for “Abomination” to raise that adrenaline back to peak point.

The record balances out quicker affairs like “Burning Decision” and “Imposter” with standard four to five- minute arrangements – so Boiling Blood understand the need for fluctuating speeds and tempos plus injecting the twin-guitar melody moments and gang-oriented choruses for embedding the songs into brains and bodies worldwide. Lost Inside a Morbid World has a punchy sound firmly made to punch you in the gut, take no prisoners, and leave you dripping in thrash ecstasy. Well done, gentlemen.