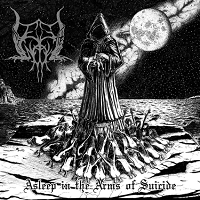 Frankly, the USBM scene has moved so far away from adhering to black metal’s original image purpose that seeing a motley bunch like Bog of the Infidel was heartening. No, they’re not a part of the flannel, bicycle-riding, craft beer swigging hipster subset of black metal, something that will hopefully be a bad memory before it’s all over; rather, they’re a spike and gauntlet wearing troupe with an actual image. Gasp. While it’s never a good idea to place a band’s image before their music, the fact the two coincide so well on Asleep in the Arms of Suicide is…what’s the word? Heartening.

Hailing from Providence, Rhode Island and with only one previous full-length to their credit (2010’s Proud Descendants of Satan), Bog of the Infidel find themselves enveloped in the warped, often technical landscape of black metal’s second wave. Their riff sensibilities can border on dissonant and melodic, usually creating a nice dichotomy maelstrom, something that comes to the fore on “Congregation of Judas,” the album’s most fertile cut. Bog of the Infidel are at their best when going at it full-speed ahead with a vista of angular, punctuated riff action, the likes of which on “Unraveling the Bracelets of Fortune” and album closer “Black Awakening Nepenthe,” are quite deadly.

The utter definition of what USBM should be, the bristling pace and unsavory chord arrangements spread across Asleep in the Arms of Suicide give Bog of the Infidel a decided edge over the more hip and trend-reliant happenings. And for a band who has been kicking around the Northeastern corridor of the United States for eight years, it’s probably wise to give Bog of the Infidel their just due. They’ve certainly earned it after this one.