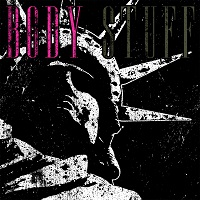 Having the unique distinction as well-respected publicist and musician, New York-based Curran Reynolds is one of the savvier PR people DR knows, primarily because Reynolds doesn’t get up in our grill about covering his bands. He’s like a nice-looking gal at the bar – he knows we’ll get around to him eventually, and the bands in his cadre are usually of the avant-garde, out-of-the-box, but valid variety, which is where his solo project Body Stuff falls in.

Descriptions for this six-song effort have fluctuated between Joy Division, Killing Joke, and Torche, all of which are founded. But, Reynolds’ work in the underrated Wetnurse has taught him the value of knowing how far to push esoteric ideas to the limit while not coming across as stuffy, which is the median idea of Body Stuff. There’s not a great deal of metallic shading across the album (“I Will Be He” is pretty heavy), so the cold air (and authoritative clean vocals of Reynolds) go a long way on opener “Street Walker,” while the industrialized “Year-Ends”  is a quick shot of tight, machine-like guitars.

People who have spent the better part of their adult and teenage lives in the metal underground usually don’t make missteps when releasing something under their own name, which is why Body Stuff is such a brief, but jarring listen. Definitely something for the outlying metal field; the bands that get name-dropped but aren’t exactly a part of the scene. Plus, Reynolds once sent this scribe a big ‘ole package from Earache Records – that’s how you win a metal journo’s heart.