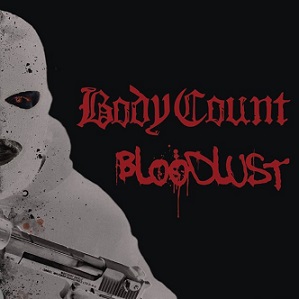 Metal has always enjoyed a love/hate relationship with rap. From the street-level jams of classic Biohazard to the funked-out stylings of Mordred (the first band of this ilk), metal and rap can coalesce properly when the right people are involved. Nu metal’s dreaded run of prominence notwithstanding, there can be a certain validity in the marriage between the two parties, like Ice-T’s Body Count. On Bloodlust (their sixth full-length to date), the band drops in a State of the World Address with a rather gritty modern metal flair. And, it’s the band’s most satisfying effort to date.

Bolstered by a heaving, particularly crystalline production job by Will Putney (Every Time I Die, Oceano, Winds of Plague), Bloodlust runs in contrast to the paper bag drum-adorning sounds so related to metal of today. Drummer Ill Will is the prime beneficiary here, turning out ample grooves on “Civil War” (complete with a spoken word intro from Dave Mustaine) and “This is Why We Ride.” Ex-Sepultura/current Soulfly and Cavalera Conspiracy throat Max Cavalera and Lamb of God’s Randy Blythe turn up on “All Love is Lost” and “Walk With Me…” respectively, but it is Ice-T’s biting social commentary and fluid raps that define Body Count. Because Ice-T’s voice already bears the mark of conviction, it further emphasizes standout jaunts like “Here I Go Again” and “No Lives Matter,” which is perhaps the band’s most significant statement to date. Even the band’s rendition of Slayer’s oft-covered “Raining Blood” works because of Ill-Will’s drumming and Ice-T’s handling of the song where he manages to enunciate Tom Araya’s words better than Araya himself.

A largely enjoyable collision between rap and metal, Bloodlust gives Body Count something they’ve occasionally missed out on, which is full-bore credibility in metal circles. Body Count have managed to create one of the better rap/metal albums since Biohazard were hitting the streets of Brooklyn hard in the early ’90s. In effect, Body Count and has given rap metal its first worthy album of the century with Bloodlust.