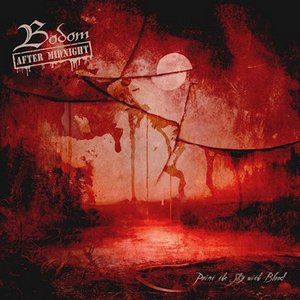 When long-running melodic death act Children of Bodom called it quits, it was upsetting for many. But guitarist/vocalist Alexi Laiho then announced Bodom After Midnight, it signaled a start to new and exciting things. Sadly, due to the untimely passing of Laiho, this three song EP now serves as swansong and tribute to the guitar legend instead of a promising new chapter. But one that all Bodom fans will rightly clamor about nonetheless.

Paint the Sky with Blood contains two original tracks as well as a cover of the classic Dissection track “Where Dead Angels Lie.” With the new songs, there does appear to be a shift back towards the earlier Bodom days in the way the songs are structured and their aggression. All the hallmarks are there from Laiho’s style, and it’s a quick pick me up of energetic, flashy guitarwork and pulverizing riffs. The title track has an addictive melodic chorus that couples with thrashy yet fun riffing through the verse and a fiery solo from Laiho – there’s a solid fusion of elements to the band that you’d never think that this was their first offering together (though admittedly there’s nothing but veteran players here). “Payback’s a Bitch” carries a more modern groove and chug to it, which gives it a more bottom-heavy feel but the swirling melodies are still there, as well as that fun/party vibe that Laiho always leveraged as a strong suit. The Dissection cover stays pretty faithful to the original, but the melodies have a bit more flair and that helps the track to feel more Bodom-like than anything else.

A fitting tribute to a guitar god that was taken away far too soon, Paint the Sky with Blood is a final reminder of Laiho’s abilities as a performer. While bittersweet in some regards, the energy that pours out of these three tracks make it a thrilling release that should be looked upon as a celebration. Laiho clearly went out with some of his strongest material, with some more than capable members giving it their all beside him.