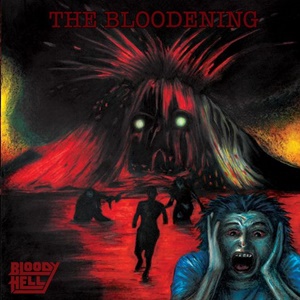 It’s not very often you hear of a band taking an extended hiatus to work with a children’s heavy metal band that does 80’s covers in child-friendly Finnish lyrics for educational purposes – but that’s the case here for Bloody Hell taking six years between releases. The Bloodening is the second album from the four-piece, taking on a grumpy old men persona delivering pure heavy metal with integrity, casting aside any pretension to focus on the music and attitude first and foremost. And the results after numerous spins regarding these twelve songs could be quite a bumpy ride depending on your stance on influences, tones, and abilities.

A love of the 80’s-period for heavy metal is evident when it comes to the main riffing, simpler/catchy choruses, and supplementary elements that branch out for this material. Twin-guitar melodies and pumping bass give off the Judas Priest/Iron Maiden volleying that keeps “In the Night We Burn” top of mind, while the slower, mid-tempo Accept riffs and Udo-esque snarl from bassist Marko Skou makes “The Undertaker” sharp (ironic considering the band also have a song with this title on their latest effort). Acoustic guitars sprout up from time to time – the opening strains for “Hangover Rider” familiar for those who remember the start of Metallica’s Ride the Lightning effort for “Fight Fire with Fire”, while working well in a melodic context for the mid-tempo headbang driver “Smoking”. And so the record moves along, a mixture of energetic and heavier numbers that hammer home the true ideals of these musicians – sneering in Teutonic-like fervor with gang-like measures during “Murders She Wrote” while ready to rumble in double kick/power glory for “Bite”. Although most of the songs clock in at metal-friendly four to five-minute bursts, the closer “Kiesma (The Museum of Modern Art)” allows Bloody Hell to stretch into epic terrain, the seven-minute plus arrangement featuring a low narrative voice opening, serene acoustic/electric embellishment, and stellar lead spots/vocal harmonies that will remind most of Judas Priest, W.A.S.P. or even Dio-era Black Sabbath for atmosphere and execution.

The minor frustrations lie in the tones present (the main snare sound a little too synthetic for an organic style), the varied vocals Marko employs (sometimes in key, sometimes snarling, more Teutonic than most) and the cover art that seems a tad off the beaten path. The Bloodening has teeth to appeal to many classic 80’s-oriented metalheads, and its unapologetic stance will warrant some attention as a result.