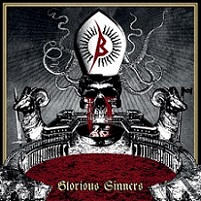 Self-branded as “hateful anti-Christian thrash,” Poland’s Bloodthirst proudly proclaim they were never a part of the “pathetic old-school” hype seen today, which is great. It’s like, were these guys in the United States when every punter who heard Bonded by Blood suddenly decided to start a band? (Sheesh, really hard to fathom all of that was about a decade ago.) Nevertheless, Glorious Sinners happens to be a five-song EP from the band, following up 2014’s Chalice of Contempt.

Because the band are Polish, a certain level of curiosity is attached to how they handle thrash. Polish thrash never quite got anywhere, save for Turbo, who had their shot at the big time in 1988 by signing to Germany’s Noise Records. Unfortunately, Turbo only lasted one album on Noise, but we digress. Bloodthirst, on the other hand, wholly appeal to the feisty, spitfire realm of European thrash, and in some respects scoop up where Destroyer 666 is currently mingling about. This evident on the darting “Reign of the Antichrist” and teaming “No God Shall Stand Before the Pope,” which for as songtitles go, is the best of the bunch.

A pretty nefarious batch of songs to match the message, Bloodthirst’s slippery grip on the tenants of thrash go a long way toward making the band sound identifiable. Considering the spiel that’s found in their artist bio, it’s of ease Bloodthirst can back up their words. Don’t want to give those religious fuddy-duddies any additional ammunition.