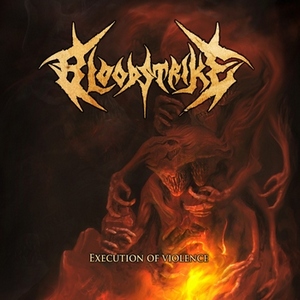 Returning to dole out second helping of old school death metal, Bloodstrike bring forth Execution of Violence. After the well-received 2015 debut (the act formed only in 2014), In Death We Rot, Execution of Violence does what you’d expect/hope of any other old school death metal worshipping band to do. The format is unchanging, but they’ve tightened things up and focused on the most important parts of their music.

Those looking for ways that Bloodstrike differ from most of your other old school death metal bands, you’ll be hard-pressed to find many. They pay homage to the masters that you would expect, with Entombed, Asphyx, and Bolt Thrower come to mind and in that regard they hit the marks just as well as any. With these type of acts, it’s more about how genuine their passion is, and how strong their riffing can be maintained. In both cases, Bloodstrike more than make their case. There’s not a song on here that doesn’t rip, slash, and tear its way through the speakers. It’s high-energy from beginning to end, even with some necessary change-ups in tempo. This is where the riff game comes in, with slower crushers like “Detest Morality” and “Creeper” soak up the Swedish buzzsaw groove (mastered by Dan Swano himself), and speedy numbers like “Corpses for Dissection” blister ahead with old school carnage in tow. Plenty of mid-tempo stuff ensures that the melodies play their part (see the title track), without taking over too much. Vocalist Holly Weden delivers the necessary rasps and roars, giving the music a more raw quality than you might expect. Also worth noting is that the album loops, with the same ending synths that begin it, which brings it nicely full-circle.

Old school death metal is all about the vibe that it brings, and Bloodstrike have it nailed on Execution of Violence. It hits as hard as you’d like, with the melodies you enjoy – worth a shot if you need your latest retro fix.