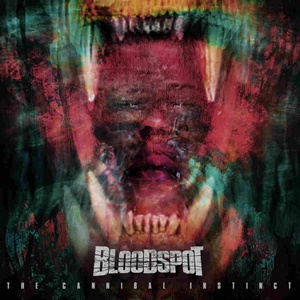 Developing a raw thrash approach that includes punk and death influences, Bloodspot hail from Germany and since 2006 have been refining their approach through one EP and three previous albums. Gaining the opportunity to tour over the last two years with acts as diverse as Pro-Pain, Dust Bolt, and Sibiir, they release their fourth album The Cannibal Instinct, five years removed from To the Marrow and a debut with Reaper Entertainment. It’s evident that the quintet still slice and dice through these eleven tracks, punishing the aural sky through savage thrash and bash principles, very much aligning to an in your face approach that can have crossover/underground appeal.

Galloping tempos and relentless rhythms penetrate the headspace as well as spitfire, hardcore-like vocals – many will be hard pressed not to lose their minds instantly to the neck snapping musical passages within “Potblitz” and the mid-tempo stacked riff parade for “The Flood”. Although most of the material sits in radio-friendly or punk/hardcore-length confines, Bloodspot occasionally stretch horizons for moodier/epic atmosphere, as the seven-minute plus “Ain’t No Gallows High Enough” delivers – containing some solid semi-doom strains against the pounding riffs, rumbling bass, and hypnotic/circular lead passages. Kudos to drummer Björn Grontzki throughout – the man is a beast on the drums, able to go from punk/thrash intensity to solid hardcore and groove metal parts at the drop of a hat, his work within “The Testament” and “I Beg to Differ” sure to appease fans of Prong, Metallica, and the Cro-Mags. Vocally Peter Kunz has a raspy crossover presence – rapid fire in the verses, call to arms during the choruses that probably finds him a favorable front man when churning out the anthems across live stages. Add in socially critical content on the lyrics that reaches across the globe and you can see the distance between these musicians and their following shrinks, coming together as one for the greater good.

Imagine taking the best elements of Grip Inc. and The Crown, putting in some of the East Coast punk/hardcore aesthetic – and then blending that together with the German finesse and punch, and that will give you some clue into Bloodspot for a style. The Cannibal Instinct thrusts a sound that has underground roots and can rivet audiences, ensuring the band a steady following.