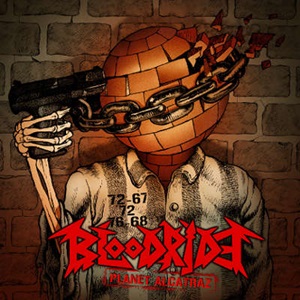 Aligning themselves on another Finnish label Inverse Records following the demise of Violent Journey who released their previous two albums (2011’s Crowned in Hell and 2014’s Bloodmachine), Bloodride continue to churn out an energetic, old school-oriented thrash style for Planet Alcatraz. Not veering off the established path has its pluses and minuses. You know what to expect, and if you’ve liked what’s been served before, this third helping isn’t going to sway you away from the dinner table. On the other hand, the familiarity can kill forward momentum, especially if hooks, choruses, and riffs aren’t exciting enough even through successive playbacks.

Teetering between the abrasive, raw thrash sounds that put Teutonic bands like Destruction and Sodom on the map with some of the latter day Bay Area energy when Dark Angel gained a foothold on the scene, there’s a safety in knowing through “S.O.B.” and “All We Deserve” that the up-tempo drumming, jackhammer riff parade, and savage vocals with gang choruses are 100% convincing, no trace of mainstream commercialism in sight. If there is a twist this time around, it would be getting a bit into the death/groove nuance for “Grave Is Calling” that Entombed put out there during Wolverine Blues, the mid-tempo guitars and pocket drum maneuvers possibly making this an audience call to arms favorite.

Guitarists Simo Partanen and Teemu Vähäkangas don’t exactly rivet in their frenzied lead breaks, but make a formidable rhythm attack – even serving up an interesting military-oriented intro for the closing “Marching Off to War” which includes a sing-a-long closing that appears to have numerous three sheets to the wind members. And the main gruff roar spewing from Jyrki Leskinen has that death ‘n’ roll twist while still being perfect for Bloodride – in line with Max Cavalera during his Beneath the Remains prime to make the title cut and “Rat Racer” adrenaline-fueled rippers. Probably wouldn’t surprise this scribe if Bloodride hasn’t looked at much discography past 1993 when it comes to Planet Alcatraz. File this in a similar sub-set like Dew-Scented and Accuser where the primal appeal and natural musical twists happen organically, making this the best record for the band to date. 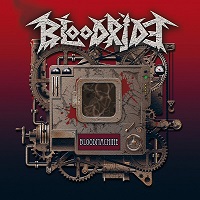