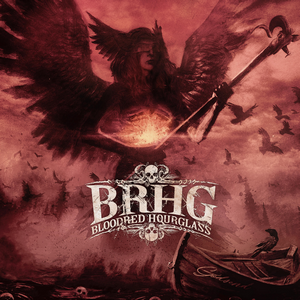 With a continued shift from more modern act into pure melodic death metal, Bloodred Hourglass’ fourth album is for those who enjoy the heavier side of the genre. Much like previous album, Heal, they combine driving thrashy tempos with more atmospheric/sorrow-esque moments. Which does mean that you can make some pretty solid assumptions about what it sounds like in the band comparison department.

You guessed it, Godsend has a pretty strong Omnium Gatherum vibe to it (and maybe a few hints of Nothgard too). But, thankfully it doesn’t entirely stick to the usual script. There’s quite a few moments of heaviness (much in part due to those thrashy tempos), even with some added help from the synths. “Devourer” is a fine example of some nice, groovy riffs that keep a driving push forward. But in the end, it’s the melodies that are the centerpiece – tracks like “August” and “The Unfinished Story” have some really gorgeous stuff going on at any given moment – those sweeping, ‘look into the ocean waves’ types that feel more introspective than anything else. Then come the more explosive solos and galloping melodies that switch up between being exhilarating and majestic. There are very few clean vocals to hear, giving it a more ‘tried and true’ feeling in tone, and the production is quite solid across the board – meaning that no one is going to mistake it for attempting an old school vibe.

Bloodred Hourglass have managed to really hit the marks with Godsend. Sure, you can draw some comparisons to other bands in their sound, but it never keeps the melodies and energy from pouring out on each song. Besides, the world’s still in need for some top-rate melodic death metal bands, and the slow burn of Bloodred Hourglass could mean that it’s just the beginning of their time to shine.