Bloodclot – Up in Arms (Metal Blade) 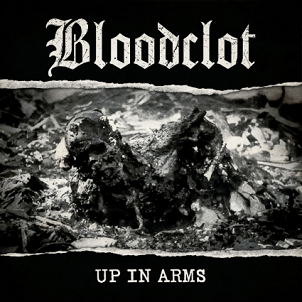 Almost did a quick double-take when seeing a tried-and-true punk band like Bloodclot popping up on Metal Blade, so here’s one for roster variety. The creation of former Cro-Mags frontman John Joseph, Bloodclot also pulls in several rock notables, including guitarist Todd Youth (ex-Danzig), bassist Nick Oliveri (ex-Queens of the Stone Age) and drummer Joey Castillo (ex-Danzig, Queens of the Stone Age). The result is Up in Arms, a firebrand of an album from a bunch of scene veterans who still have plenty left to say…and are still more than capable of stringing together some upward punk jams.

Joseph, whose 2007 book The Evolution of a Cro-Magnon, is a must-read, still packs a rather hearty punk wallop after being in the punk business for over three decades. While the music behind him is free-flowing, virtually classic punk, Joseph’s hardened and spirited delivery (check out his sideways wails on “Manic”) is what drives these songs around the circle pit. And Joseph tackles a variety of topics, from social injustice, political matters all the way to his own life experiences (“Prayer” being easily the best of the bunch), proving himself not only as a warts-and-all frontman, but a true punk troubadour.

This goes without saying, but Up in Arms blows through pretty quick, like a glancing punk tornado coming to blitz an unsuspecting town. It’s an album defies age and the conventional wisdom that perhaps punk (or extreme metal as a whole) is to be left to the younger generation. Not so says Bloodclot, who whip up a storm like its 1985 at CBGB’s.