Blood of the Black Owl – Light the Fires (Bindrune Recordings) 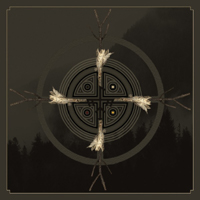 Take a seat by the campfire and look out around you. Awash in the orange glow an open and endless night beckoning, isolating but comforting. A bit abstract but that’s the mood throughout Light the Fires!, a release by a band classified as doom but with almost nary a distorted note to be found. Instead the album is dominated by acoustic guitar, very sparse drums, vocal harmonies, throat singing, what I can only guess to be a pan flute, all anchored with a tribal atmosphere and ongoing sense of tranquility. If there were ever an argument to be made for the creation of ‘aboriginal metal’ this would perhaps be the best evidence for it. A very left-field release, Blood of the Black Owl has created something spectacular and other worldly here.

Doom-like is an ample qualifier in discussing the pace of every track, if nothing else. Album opener “Caller of Spirits” crawls along, its title personified as the song comes across as something of a séance, throat singing backed by the flute and other folk-ish instruments. Across its 13-and-a half-minutes there is no particular incline of intensity or march to catharsis, but discernible movements clearly exist – and they’re all fantastic.

This slow-burning and earthy approach continues over tracks “Wind Eye” and “Rise and Shine,” though acoustic guitar comes into play and melodic, if reserved, vocals fall in, floating over the music. Distortion finally enters the fray and the doom-laden dirge overtakes “Sundrojan” and “Soil Magicians.” Though a particularly malevolent atmosphere and tone is present in the aptly titled “Disgust and the Horrible Realization of Apathy,” it perhaps serves to illustrate that even in the most serene of surroundings suffering always lingers near. Through the mournful and droning second half of the song this becomes especially clear, all the inherent life in whatever is present being drained out and disappearing into the dark. A surprise release by a group from which I possessed no previous exposure, I cannot deny being astonished by this release on more than one occasion over the course of its 75 minutes.

In no way is it light listening nor an easy listen for anyone, but for the avant-garde minded or those seeking something withdrawn and earthy, you likely couldn’t do better. This one is a grower and an enormous one at that. Seek it out and invest

yourself, throw on some quality headphones and kill out all lights. The journey taken in Light the Fires! Is not one you’ll readily forget.

Blood of the Black Owl on Metal Archives