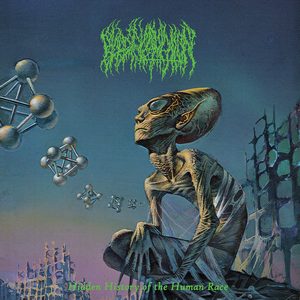 One of the ‘big’ names in the underground old school death metal revival, it’s been a hot minute since the band released the buzzworthy Starspawn (2016 to be exact). Given the expansion of the genre, as well as the progress made by others in that time, it would be easy to see the band end up by the wayside, but with Hidden History of the Human Race, they’ve managed to outdo themselves. They’ve expanded further, and crafted something that should find easy footing across the extreme metal pond.

It’s an interesting album, in the sense that there’s only four songs and it’s 36-minutes total. That becomes a more wondrous thing when you realize that the final track – one with it’s name as long as the length (“Awakening from the Dream of Existence to the Multidimensional Nature of Our Reality (Mirror of the Soul”), takes up half of the runtime. Each track in and of itself sticks apart from each other, while pushing some envelops into progressive, occasionally psychedelic, and utter savagery at times. Opening up with the most brutal track overall, it lays the foundations still with some proggy bliss to clash with the almost Suffocation-esque slowdowns. “The Giza Power Plant” pushes the trippy vibes a bit further, using some Middle Eastern melodies and space-y atmospheres as an excellent counter – some almost dreamy moments allow the moments that they pull out all of the aggressive stops to feel even heavier in comparison. They then enhance the melodic end on the eerie and sometimes Pink Floyd-esque “Inner Paths (To Outer Space).” To close things out, the best thing that can be said about the final track is that it does not feel like a long track at all. Its constantly engaging, twisting and turning through downright brutal riffs and technical shredding, spaced-out atmosphere, progressive melodies, and more. It’s nothing short of an explosive yet epic finale.

An impressive offering from Blood Incantation that’s deserving of the hype preceding it. The way that they merge some incredibly brutal and genuine death metal with more progressive and space-y atmosphere is something that you don’t hear every day. Perfect for those seeking the weirder side of death metal.