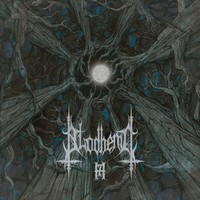 If it can be claimed that there is a singular cradle for black metal, Bergen Norway would be the obvious location. Truly, it’s never a surprise to come across yet another release from yet another impressive act from this city, year-in, year-out. Just last month saw the iconic Taake deliver it’s 6th opus, and now here is released the second album from perhaps one kindred spirit with Taake. The similarities between the two jump out straight away due to locale and makeup (being one-man black metal bands…not corpsepaint). Secondly in that main man Invisus is also mega-talented, delivering a full, modern, scathing and ripping Norwegian black metal with no synths or symphonies, no clean vocals with harmonies.

At the top of the album, if one at first thought they were listening to a new Taake song, they could be forgiven, as “Flammenes Virke” delivers all of those qualities and quirks in great form. A nice start for fans of this kind of dynamic Norwegian black metal. Not really toeing any lines, tempo-wise, there is a nice variety of speeds in here, explosive drumming throughout, with double kicks galore, ranging from blasts to straight-forward lines, nice fills and clean production rounding things out. The same can be said for the other instruments, really – no kvlt “raccoon in a trash can” sounds here…nice production all around.

The subtle melodic riffs and well-developed structures that comprise track four’s “Veiten” combine to deliver the first highlight on the album. Absolutely a killer song – if the album was chock full of tunes of this caliber, we could be looking at masterpiece. The other clear-cut favorite on here is “Holmengraa”, where Blodhemn saves the best for last, closing out this seven song album on a real high note. Now, to be fair I don’t think the two aforementioned songs have things that the rest do not, honestly it is probably just the memorability of the melodic elements of these songs which stays with me more than the rest of the lot (which are all very good).

I’ve made the comparisons up the page enough, so I won’t again. But, if you like the first then I think you should try Blodhemn. It’s good to have another singular voice in the genre, pushing interesting and energetic, guitar-centric, modern black metal forward.