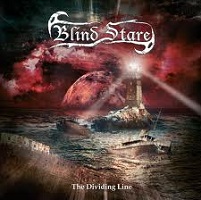 No country does a better job at developing its metal bands than Finland. There’s a bottomless pit of quality acts and each (including the big names) go through the same process of recording a promising, not perfect debut, then exploding. It happened to the likes of Children of Bodom, Nightwish, Sonata Arctica, and dozens of other sauna-loving bands we’re forgetting. Their respective debuts simply pale in comparison to the releases that follwed. The same ascendency may not happen for Blind Stare, but on their sophomore The Dividing Line, it certainly looks feasible.

Brandishing the symphonic metal tag, Blind Stare leans heavily on the melodic death metal side of the fence, with the pre-approved death-on-power-metal squalor ringing loud and clear throughout the album’s 11-song running order. They’re like a baby Kalmah, minus the dazzling muscianship; or an almost-realized Evemaster, just without the grueling pace and scathing vocals. The main separator in this is singer Eino Tuouminen, who has the occasional clean

vocal moment on cuts like “Bring Down the Tears” and “Death and Rebirth.”

Understandably, the Finns hit some snags on the poorly-conceived “The Disciple,” which lacks focus; same bodes for “Blessing of Freyja,” song where Blind Stare tries to demonstrate some girth in the death metal department. Yet it’s the symphonic sprawl of “Cold New World,” or the deft use of melody in “Mind 8127’s Armor” that give credence to the notion that with some seasoning and additional time in the studio, Blind Stare might be a band to look out for.

Up until this point, Blind Stare’s output since their 1999 formation has been sparse, with only 2005’s Symphony of Delusions to show. Therefore, one should give these Finns some leeway for the occasional songwriting snafu…methinks they won’t be making the same mistakes next go ’round. And if that’s the case, then they’ll be yet another Finnish metal band worth giving a flying you-know-what about.